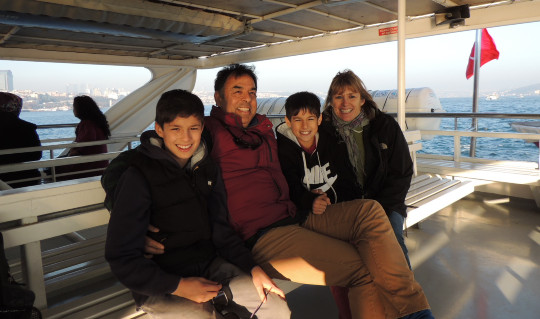 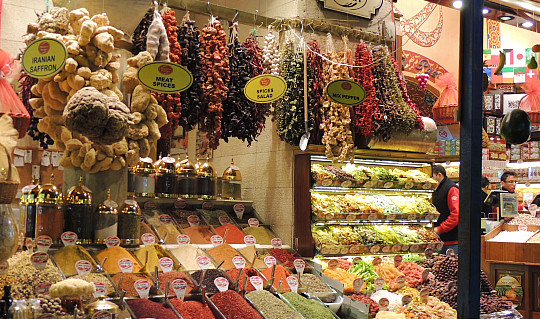 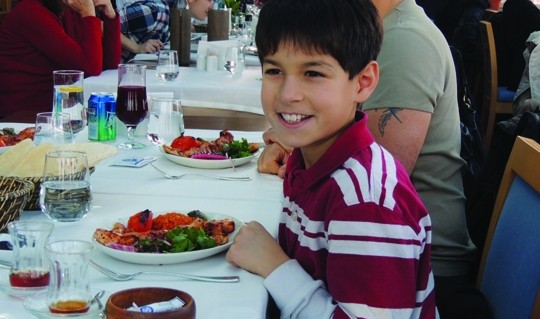 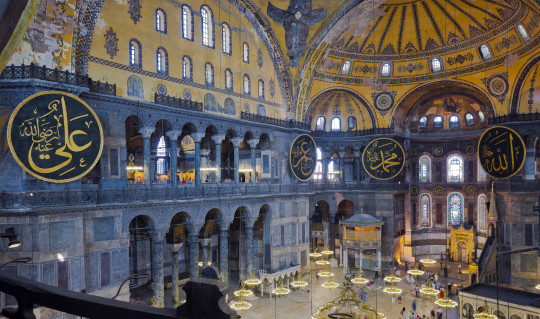 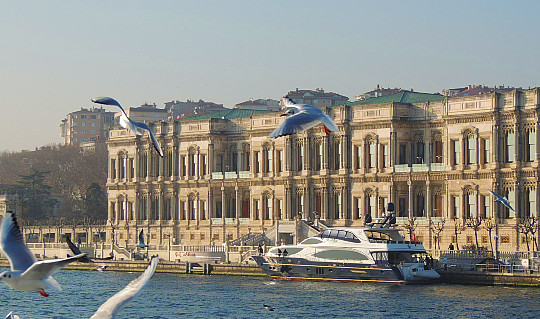 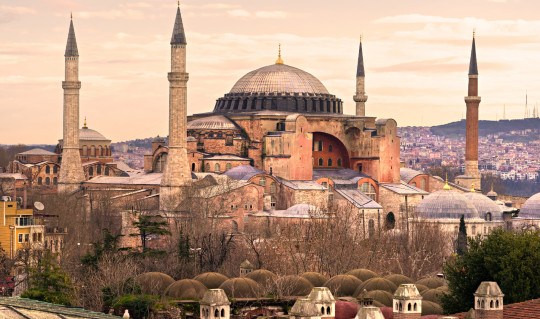 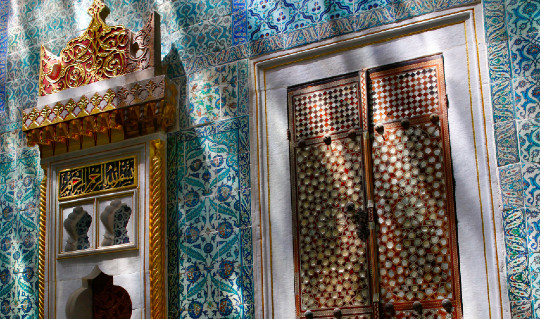 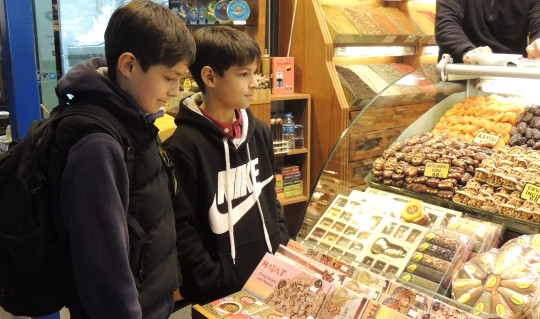 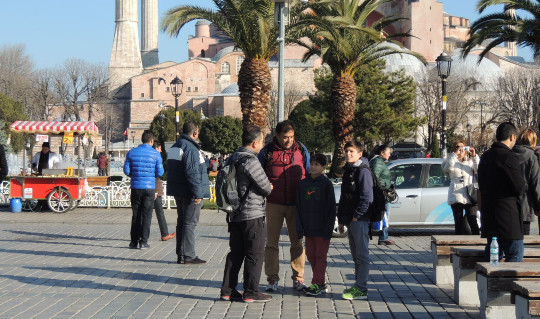 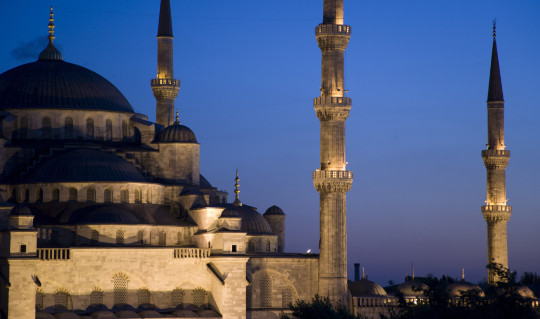 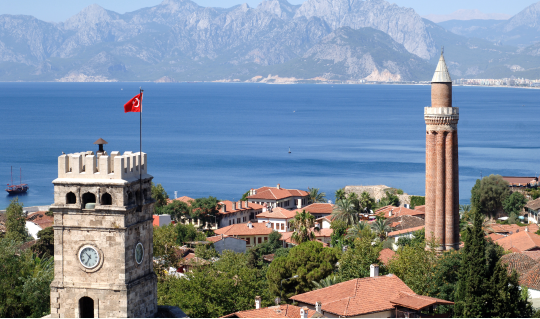 “My neck was aching – craning upwards to take in the extraordinary dazzling sight above.

The Golden Domes of Hagia Santa Sophia towered over me – stained glass shot through with purple and red, golden angels staring out from their lofty roosts, giant Arabic scripts from a bygone era when the Sophia was a place of worship – not the museum of today. Monumental doors towered over small boys and cool marble floors stretched out before us.

I’ve brought my husband and sons aged 10 and 12 to Istanbul for a short city break. We’ve seized the opportunity as we’re off to the Middle East for a family holiday, flying with Turkish Airlines. We’re all extremely impressed with the airline – excellent food, friendly staff and a choice of films that would satisfy even the most ardent movie-goer. Being the airline’s hub and less than four hours’ flight from London, Istanbul is perfectly placed for a two to three day stopover en-route to your final destination.

I loved the city’s Basilica Cistern, the dimly-lit underground home to hundreds of catfish –swimming alongside giant stone medusas, sitting in their watery graves. Ornate carved pillars support the roof of this gargantuan tank, the water supply for the whole city, with enough to last two years or more in the event of a siege.

My elder son was mesmerized by the Blue Mosque – so called because of its richly tiled blue and white interior. He marvelled at the myriad of chandelier lamps dominating the prayer hall and the biggest carpet you’ve ever seen.

Out for supper and the kebabs were sizzling, the flat breads puffed up with heat fresh from the oven and the waiters smiling and cheeky with the children, asking their favourite football team and attentively suggesting possible delicacies they might enjoy.

The streets of Istanbul bustled with shoppers as the sun slid over the horizon and the call to prayer echoed over the city – the cacophony of incantations, timbres and timing of the muezzins melding into one continuous harmony.

Crossing the street from our hotel, we pushed through the crowds and merged with the gentle stream of evening bargain hunters. Spice stalls, Turkish delight, bracelets, lanterns and household goods rubbed shoulders with loofahs, leatherware, trinkets and flowing scarves. Inevitably I let myself be drawn into the obligatory carpet shop. If truth be told, I love the process – the huge array of silks, wools and colours scattered before you, the tapping of the calculator, the gesturing and posturing – I’ve always believed that half the enjoyment of a carpet in your sitting room is in fact the memory of its purchase! The boys giggled at this age-old process – tradition intertwined with economy as we halved the original price, then halved it again, until the amount was settled and the carpet folded into its perfect brown paper package.

Our second day took us onto the Bosphorus, the mighty river that separates the Asian and European sides of Istanbul. At its height, the former Byzantine capital of the great Ottoman Empire spanned 57 countries and dominated vast swathes of the region for over 600 years. The river itself is some 31km long and stretches over 3km at its widest point. From our boat its banks revealed a vast array of wealth: Decadent villas owned by some of the richest families in Turkey, vast ducal waterfront edifices built in the style of neo-Georgian palaces of the 18th and 19th centuries, the military academy which dominates a large section of shoreline and ancient wooden town houses. Seagulls squabbled in our wake and, looking down, we spotted a host of jellyfish in the churning waters.

As the sun began to set over the city for the second time, we hurried to the Topkapi Palace, the opulent court of the last sultans of this great empire.

Richly jewelled daggers (khanjars), golden boxes overflowing with emeralds (like something out of an Ali Baba extravaganza) and gilded cups and bracelets jostled for the limelight, which was stolen by the most enormous diamond I have ever seen. The boys remarked that our very own crown jewels (which we’ve recently seen in London) paled into insignificance by comparison.

Incongruously the sultans had a fantastic collection of European clocks – strangely refined items when set against a backdrop of military might. Golden armour for their horses, bejewelled chain mail for ceremonial entry of newly-seized capitals, and numerous swords, bows, arrows, hatchets and knives.

We bade farewell to our superlative guide and friend Taner – quite honestly one of the best I have had anywhere in the world – and headed for the airport promising to return for a longer stay. My husband, fascinated by military history and legends, to the ancient city of Troy, the boys to the legendary cave dwellings of Cappadocia and, for me, to the battlefields of Gallipoli and the Turquoise Aegean Coast – Turkey offers so much for everyone.”