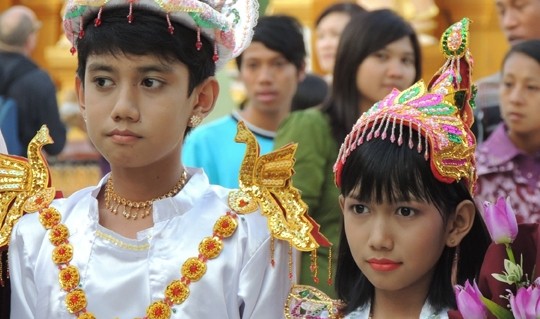 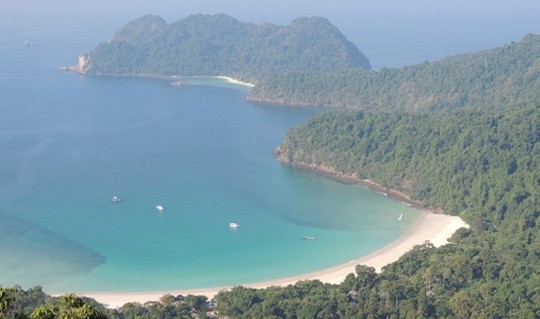 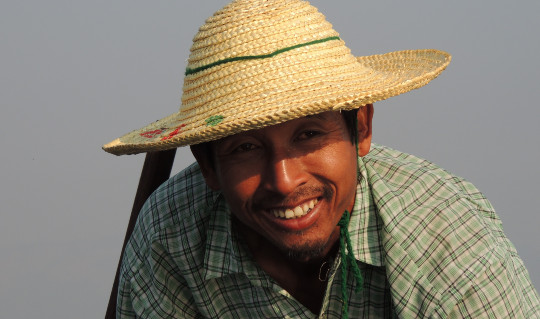 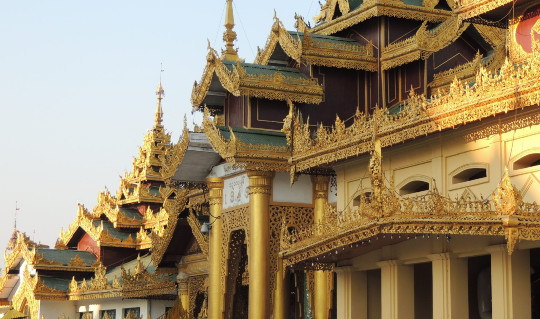 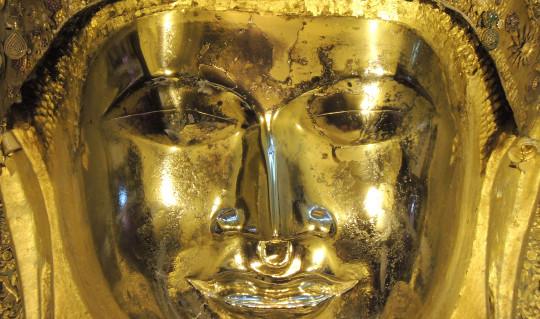 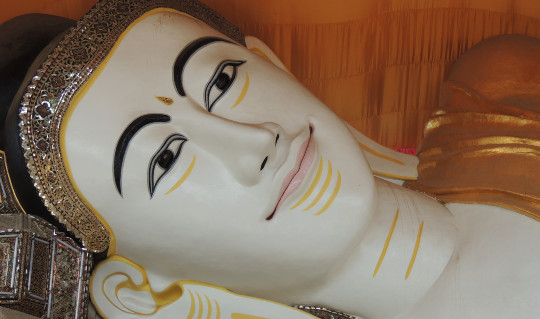 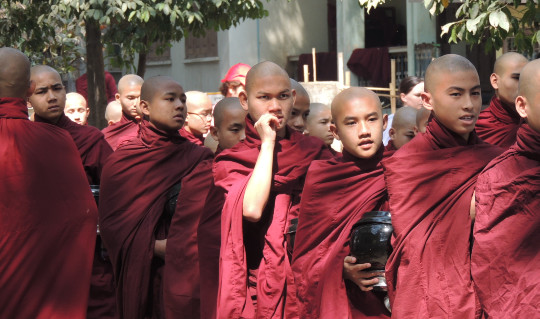 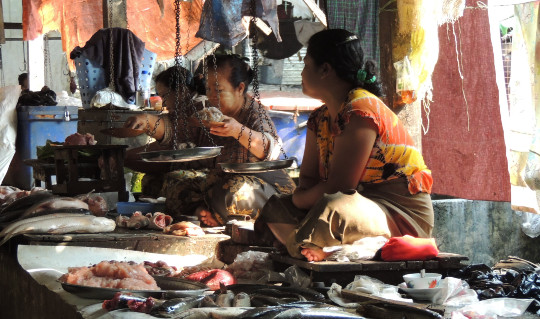 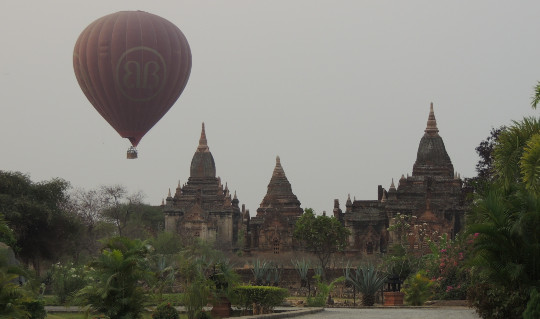 “If you are an avid reader of the travel press then I’m sure the recent pro-democracy changes in Myanmar won’t have escaped your notice. My journey through this enticing country served two purposes – to see the latest developments around the country and to head south to try to visit the Sea Gypsy communities that we highlighted in my October 2012 newsletter…

Myanmar…. the scent of frangipani carried by the breeze, incense wafting over pagodas, the deep resonant clang of a temple bell, the silent lines of red-robed monks, rows of flickering oil lamps, the way dusk falls like a soothing curtain, being enveloped in warm air and the smiling serenity of these open calm people who have suffered so much, yet have so much to give.

I’m in Yangon, away from poetry, back to reality. The heat, the dust, the crowds and the must-see Shwedagon Pagoda back-lit at sundown. Here the chatter of children mingled with the chanting of nuns in the prayer halls; incense sticks wafted their exotic scents over smoky oil lamps and I paused to watch the crescent moon rise majestically behind the 98 metre golden spire. Crowds of colourfully clad locals mingle with solemn monks, oil lamps cast shadows over golden pagodas, swifts swoop overhead. There are processions, worshippers and children having fun.  The backdrop – this immense structure encrusted with the best of Burmese jewels and enrobed in gold leaf.

Heading out the next day, I made a solemn pause at the Htauk Kyant War Memorial close to the city to look for the memorial headstone of a great uncle of mine. These are beautifully kept emotive places and, nearly 70 years to the day, I was able to make that connection to this branch of our family. My great uncle was unlucky – but at least his family was able to escape the Japanese invasion of Myanmar during WWII with a legendary trek out of Burma on elephants.

Calling in at Bago, I marveled at the enormous proportions of their pièce de resistance, a gargantuan reclining Buddha (just one eyebrow is 2.3 metres long) before heading up into the hills to Khaitkyho, some three hours’ drive east of Yangon. Khaitkyho is a hill station, at 3,600m, accessed by a rather hairy 20 minute drive up the hairpin roads in a local truck jam-packed with excited Burmese local visitors followed by a 45 minute uphill trek to the ridge above.  There I was rewarded by a unique sight – an enormous golden boulder perched precariously on the hillside. Needless to say it is as sacred as a pagoda and attracts many local visitors – which made my stop there only the more colourful.

Much later, leaving behind the markets, pagodas and majestic colonial buildings of a former era, I headed from Yangon by twin-prop aircraft to Mandalay, the last capital of the third Myanmar Empire. Taking a little wooden boat out on the lake under Myanmar’s longest wooden bridge, I watched the duck farmers rounding up their errant charges by canoe and the graceful casting of silky nets by local fishermen. The streets of Mandalay are lined with wood and alabaster carvings, silk tapestries, gold leaf products, silverware and weaving – a showcase for 19th century art and architecture…and very tempting indeed. I visited the remains of the former Royal Palace, tragically bombed out by the British in 1945 in an attempt to eliminate the Japanese troops from the city, and where today only the moat and four square walls (each some 2km in length) still survive.  I jumped aboard a wonderfully scruffy fishing vessel to chug 7km up the Irrawaddy River to seek out the world’s biggest bell. At 90 tons you’d be hard-pressed to find anything more impressive than this offering at Mingun. My final stop here was Kuthodaw Pagoda – the world’s largest book, with 729 marble slabs engraved with Buddhist scriptures on a site covering several acres.

No visit to a former colony can be complete without a hill station, and Pyin Oo Lwin, some two hours from Mandalay, proved to be no disappointment. The grandeur in the orderly flowerbeds, tightly clipped box hedges, cool lakes and flowering trees of its botanical gardens contrasted sharply with the best lunch of my trip.  In a simple local café suggested by my guide, I was served a startling array of tasty dishes from the Chin State – finely sliced white carrot, chillied fish, delicate steamed marrow, morning glory and aubergine in a rich gravy. We ended with raw ginger slices with salty peanuts and sugar soaked chestnuts all washed down with fresh lime soda and a bill of five US dollars for the lot!

I travelled from Mandalay to Bagan on the river- an unforgettable 24 hour journey in a recently built copy of the former flotilla boats of a bygone era. All brass, teak and rattan chairs – one quite expected Hercules Poirot to step on board any minute in tropical linen suit and pith helmet!

Gently floating down the river, we lazed in chairs on the sundeck, watching tugs and barges carrying teak and gravel, children swimming and splashing on the river bank and fishing boats puttering from here to there checking their nets. The only interruption to an on-deck snooze was the jarring bump as we bruised a sand bank or the clang of the brass gong to summon us to dine on delicious Burmese curries and fresh produce.

Arriving in Bagan, I found the dusty narrow tracks between temples are best experienced at dusk – through the ears of the pony pulling you along in a simple cart. I do not claim to have visited all 4,400 of the temples for which Bagan is so renowned but I have certainly made a start!

From here a flight to Heho and a drive to Kalaw. I loved the cool mountain air and mock tudor holiday houses, neat flower gardens and quaint railway station. En route I saw the sacred caves of Pindaya (9,000 buddhas inside an enormous natural limestone cavern). On the way – one of the best moments of any trip – heading to the morning market, we chanced upon a colourful initiation ceremony:  A column of prancing stallions decked out in brocade and silk, each with a child clad in a glittering robe perched atop on their way to the monastery to be initiated as monks.  They were followed by finely dressed ladies in high heels, carrying delicate parasols. These are the experiences no brochure can promise you.

The drive down to Inle was very special – rural Burma at its best.  We passed glorious fields of potatoes, peas, sunflowers, oranges, tea and rice. The green-brown patchwork extended for miles – a bucolic drive indeed.

Reaching Inle Lake I took a journey of indescribable beauty. Firstly skimming through water hyacinths, then out into the shimmering expanse of the lake, the gentle plop of the fisherman’s nets, rhythmic motions of the native leg rowers, their actions reflected in the mirror lake. My carriage, a long tail boat, driven with enormous skill as we branched into narrow lanes, through shady water alleys overhung with banyan and bamboo and interwoven with fisher-huts on stilts. Surging through narrow ‘locks’ formed by woven bamboo we stopped to visit 16th century temples and floating farms.

And how to end? I  headed to Macleod Island, a tiny paradise some 40 miles off the coast of  Myanmar’s deep south, close to the Thai border  and one of some 800 such islands – heavenly teardrops in the Andaman Sea that make up the Mergui Archipelago. Twenty-two huts nestled among palms, just steps from the glorious white sandy beach and turquoise water beyond. Snorkeling with reef sharks, jungle trekking, kayaking at sunset and picnics on deserted beaches – this is as the coast of Thailand was before tourism arrived. On my last day, a chance meeting with a Sea Gypsy family- an elusive clan who live to the rhythm of the water – taking a ride with them in their tiny boat is something I will remember for a long time.

Well, what of this extraordinary journey? My last word must go to the Burmese. Ever gracious and always ready with a smiling ‘Mingalaba’ (how are you) they have endured so much, yet appear to have lost so little of their inner peace. Almost without exception they possess an air of contentment, serenity and kindness, the like of which I can honestly say I have never before encountered anywhere in the world. Myanmar is full of mineral wealth and priceless gems, but I personally believe the biggest gems of all are the Burmese themselves”.

I urge you to go, and soon.